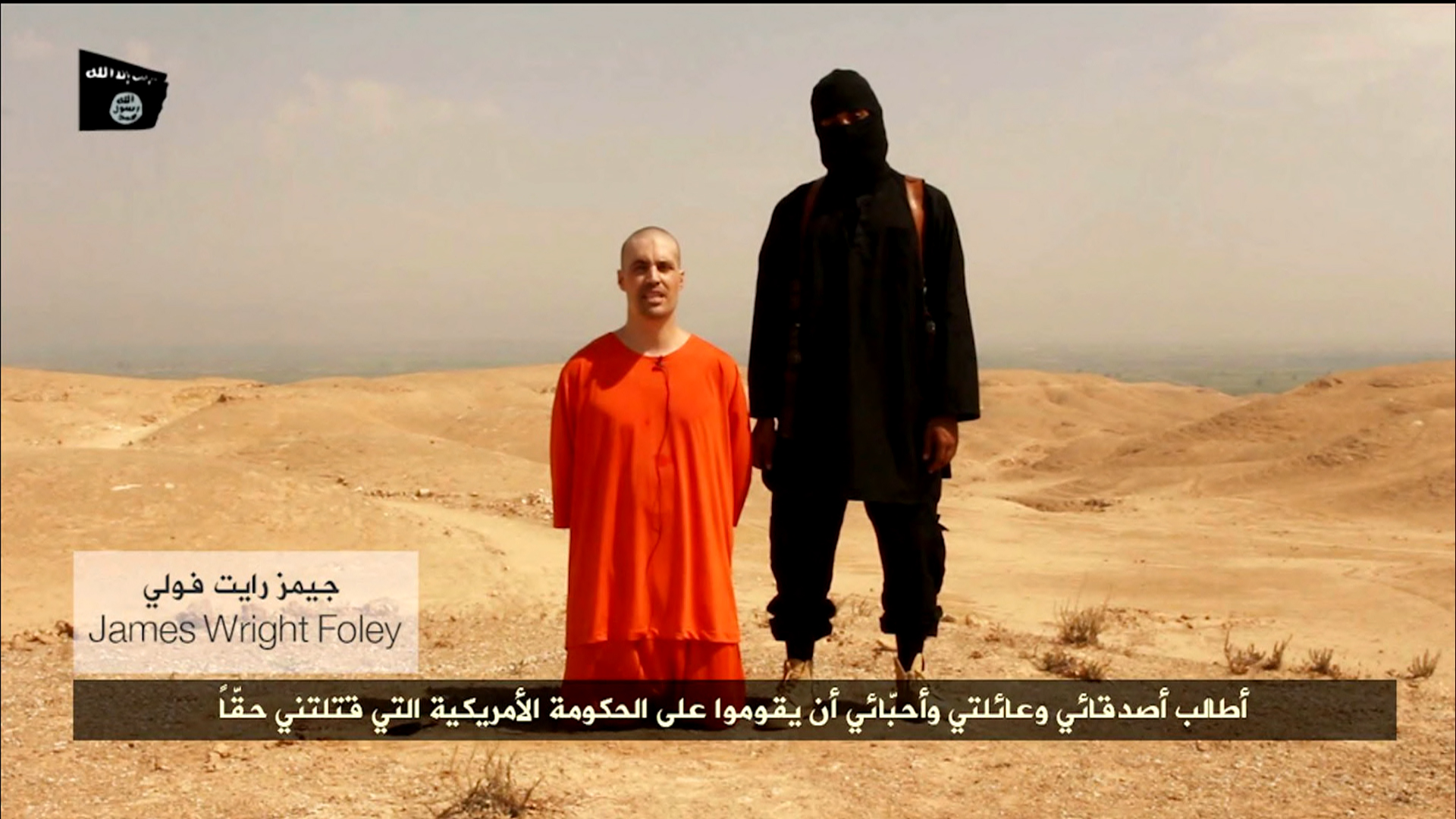 Throughout 2014 ISIS released numerous videos directly targeting the US and UK, in these videos they used American and British hostages as leverage to get the west to stop military action against ISIS in Syria, so in this report I will be completely debunking the footage showing the alleged 'beheadings' of Foley, Sotloff and Haines - I am aware that more videos exist but due to the widespread censorship of the other videos I was unable to obtain them for analysis. But with the first three being such obvious fakes it's easy to see that the rest were staged in a similar fashion.

The 'beheading' videos of Foley, Sotloff and Haines all follow a very peculiar route of not showing the beheading itself, instead fading to black as the beheading begins and merely showing a still image panning over the 'beheaded corpse' of the victim in question, it's a rather shoddily slapped together fake to justify further war in Syria, let's start by picking apart the James Foley footage. Here's the last few frames of the 'beheading' in question which really expose the truth behind this entire sham. 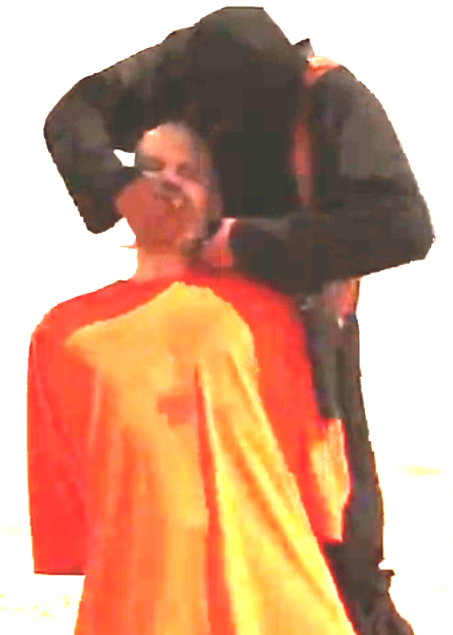 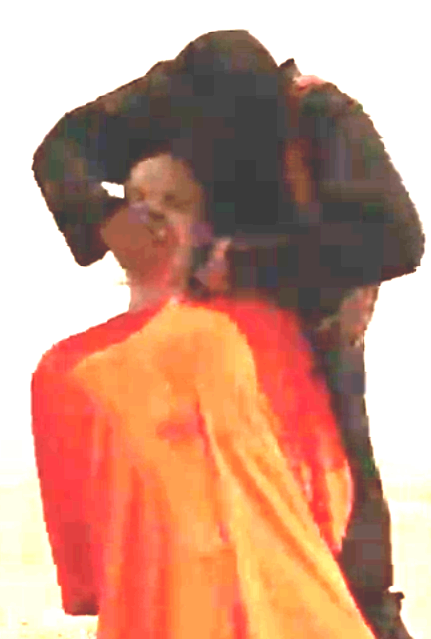 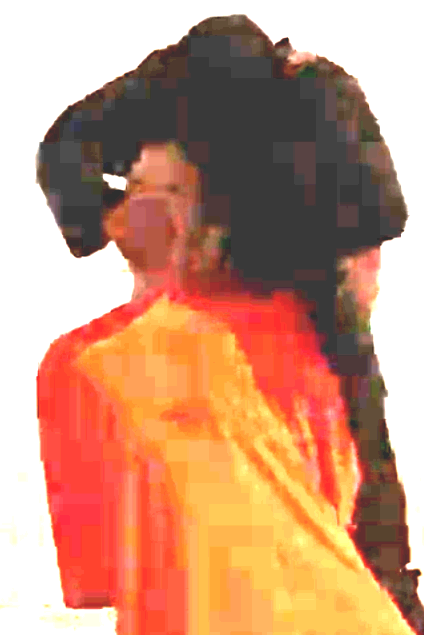 I've increased the brightness and contrast on these frames to give you a better view on what's happening in them, but there's one thing that's clearly and blatantly missing from all of these... Blood, where is it? There isn't any blood on Foley's shirt, down his neck or really anywhere - if this was a real beheading there would be blood, and a lot of it. But there isn't any, let's take a look at the supposed 'death photo' of Foley next...

I've removed the more graphic parts of this image for obvious reasons, but there is one thing about this image that's peculiar - knowing that Foley is male why are his arms and legs hairless? He couldn't have shaved them knowing he was in an active warzone and ontop of that was being held captive by ISIS. Here's a more clear shot of what Foley's arms look like. 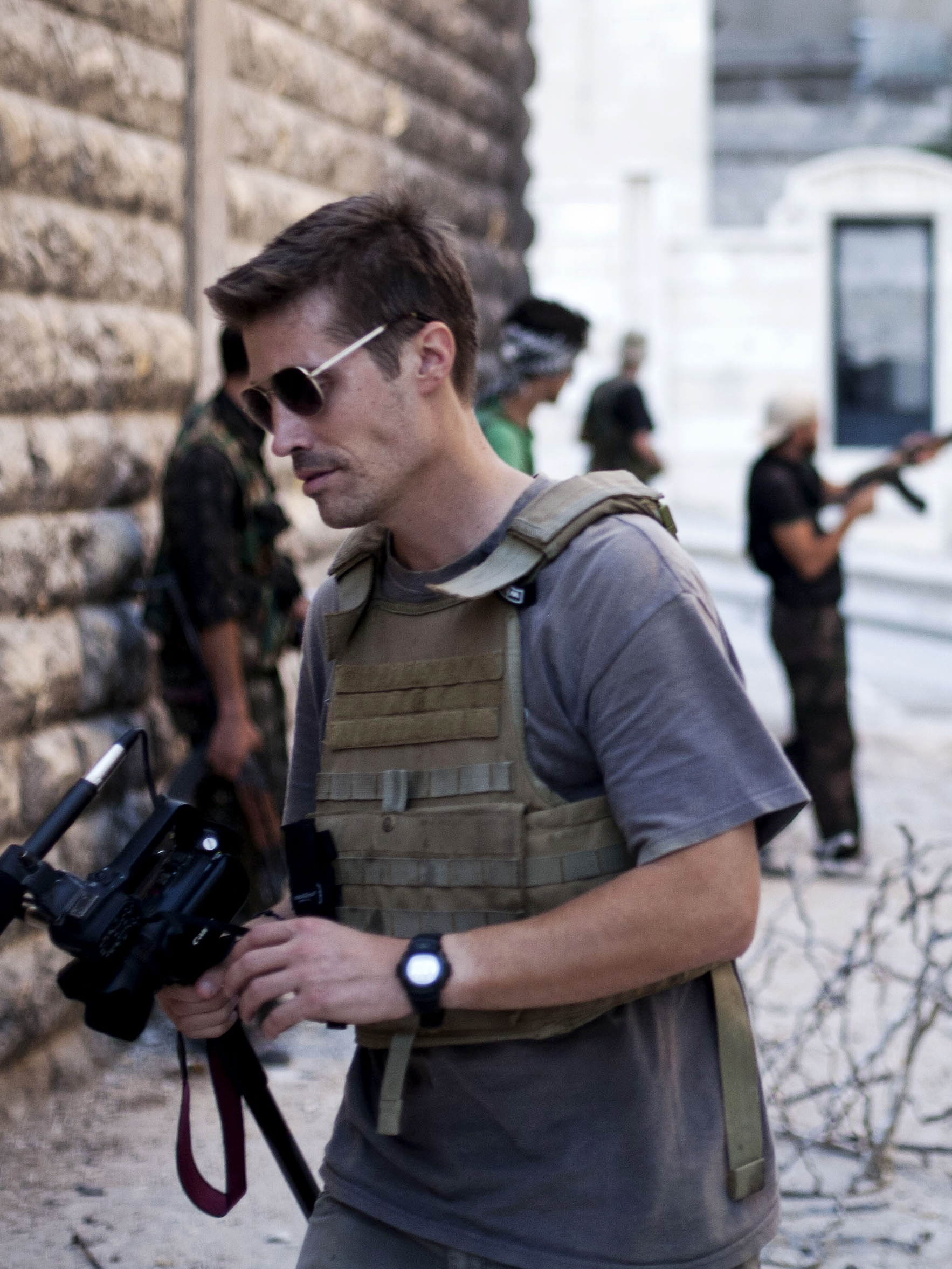 The 'dead body' in this photo is clearly NOT Foley, Foley's arms were hairy, tanned and a lot thicker than the 'body' used in the video, anyone can see this because it's clear as day, combine this with the fact that numerous forensic analysts said that the video was most likely staged, something is really smelling fishy... But we've just started, so buckle up as it gets a lot weirder from here. It's time to look at the Sotloff footage. 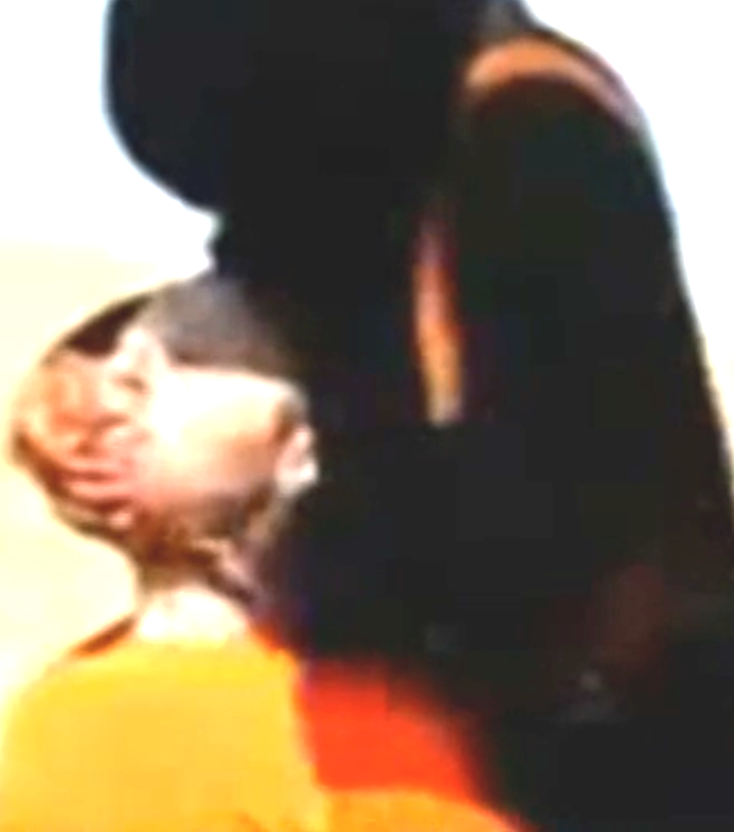 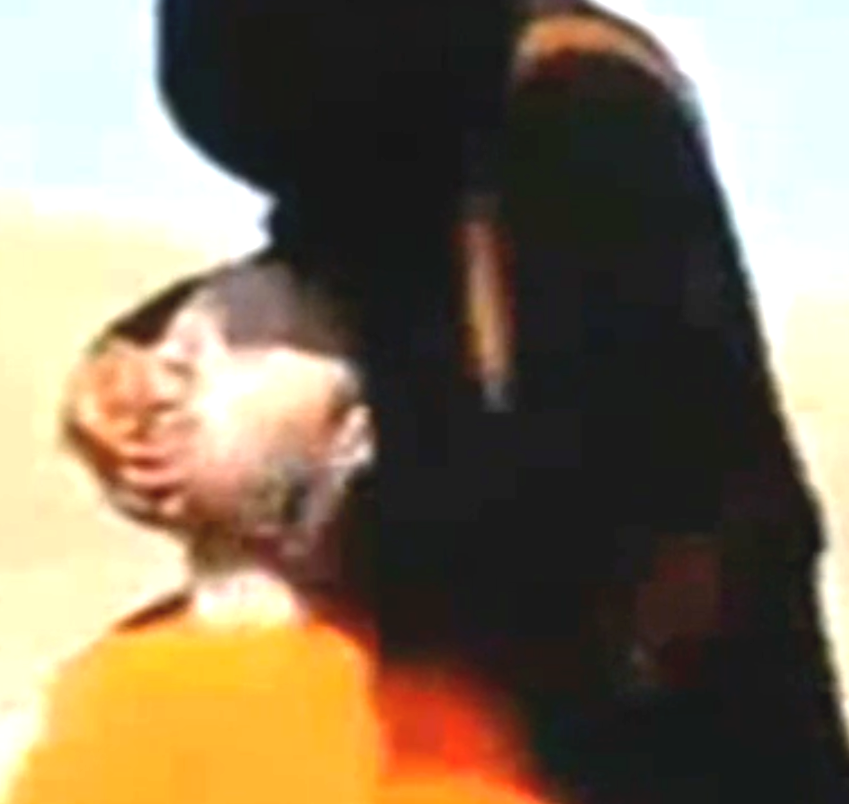 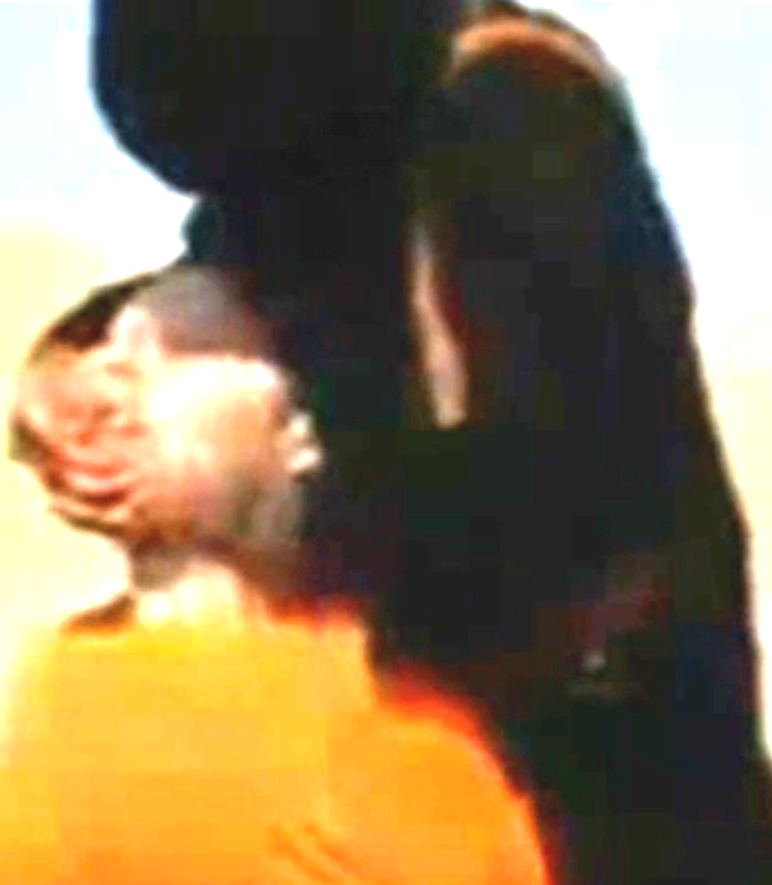 I've repeated the same actions I took with the Foley video, increasing the brightness and contrast on the last few frames and... What do you know, there's still not a SINGLE drop of blood anywhere in BOTH of these videos... The Sotloff death photo doesn't show anything that different from Foley's, but there is one thing to point out. 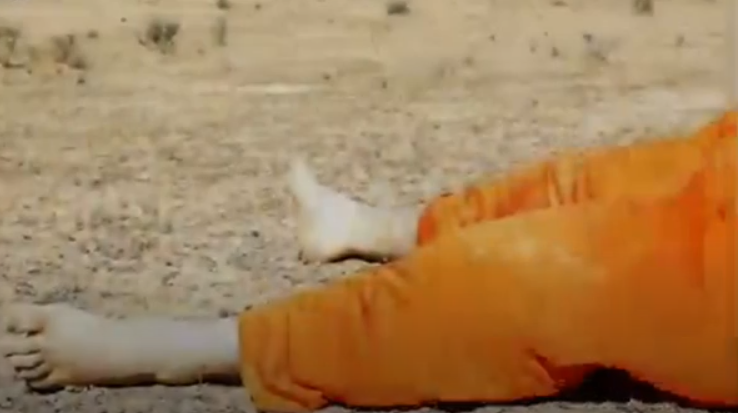 The legs of Sotloff seem to be similar to Foley's, which is incredibly strange but important to note for a plethora of reasons. Now, time to look at the David Haines footage. 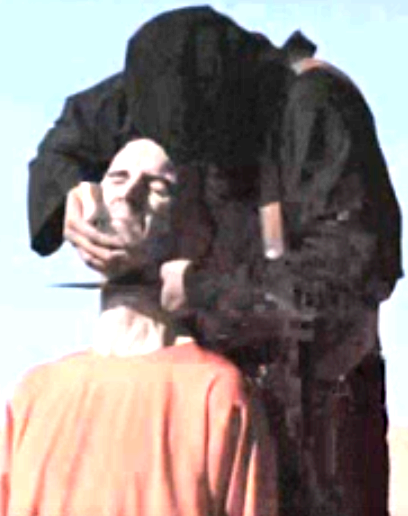 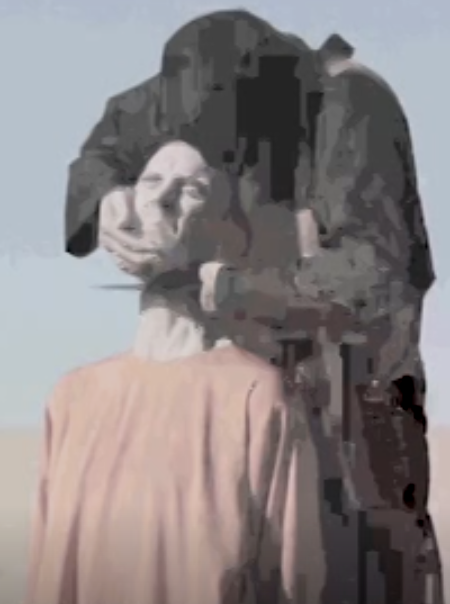 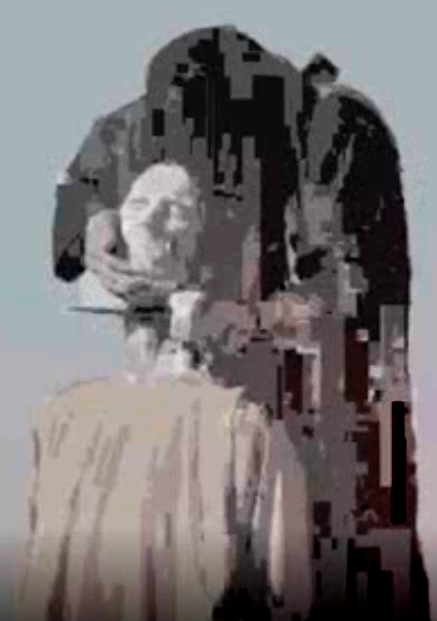 Again with both Foley and Sotloff I took the last few frames from the beheading videos then increased the contrast and brightness to find any signs of blood or a cut on their neck, but there is no sign of visible injury or blood in any of these videos, why? Because they're staged, just like the visual and forensics experts said earlier they faked these videos, ISIS doesn't fake their beheading videos, anyone who's ever seen one knows that they show every last detail of the beheading.

No photo was able to be recovered of Haines 'dead body' as the footage becomes incredibly corrupted and it's practically unusable for any form of independent analysis, this was mostly likely on purpose.

But we're not done just yet, the man in the videos was identified as Mohammed Emwazi, a Kuwaiti migrant to the UK who then later left the country for Syria in 2012. The odd thing about Emwazi though is that he was on the MI5's radar as early as 2007, the MI5 also admitted to trying to hire him as an informant, I believe that Emwazi was hired to fake these videos with the help of the MI5/CIA then killed and set up to take the blame, the videos themselves are far too sloppy for them to not have been staged.

Speaking of them being staged, footage released in 2015 from the Ukrainian group CyberBerkut appears to show one of the beheadings being filmed on a greenscreen set - let's take a peak at the footage.

One of the beheading videos being filmed on a greenscreen set

So either Foley, Sotloff, Haines and Emwazi are all still alive or they were all killed after these videos were filmed so they wouldn't speak out about their roles as crisis actors, personally I believe that they were all killed in order to keep them silent. Dead men tell no tales after all.