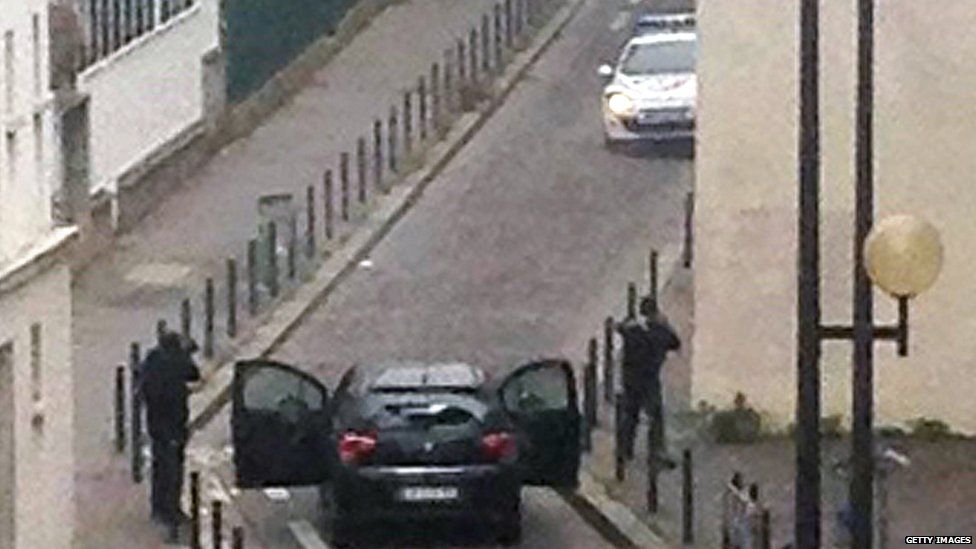 The two shooters seen on the street, supposedly in a shootout with the police

On January 7th, 2015 a pair of Arab migrants living in France by the names of Chérif and Saïd Kouachi killed 12 and wounded 11 at the offices for the satirical newspaper Charlie Hebdo before fleeing - but there's much more to meet the eye, as always.

Perhaps the first and most noteworthy thing to mention is the footage which certain people and agencies have tried their hardest to suppress by repeatedly taking it off of the internet or replacing it with censored versions to hide the 'graphic content' or whatever lame excuse they used despite this video being the poster child for the entire Charlie Hebdo shooting in general, despite other videos of the shooting existing as well.

Do you see the problem? I'll point it out incase it isn't obvious enough, but once you notice it the fakery here is very obvious, once we get the elephant out of the room I'll pick apart the other aspects of the video too so don't worry. 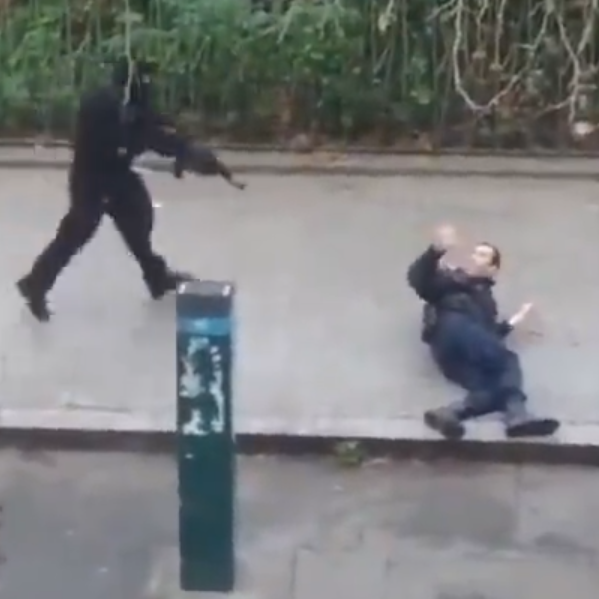 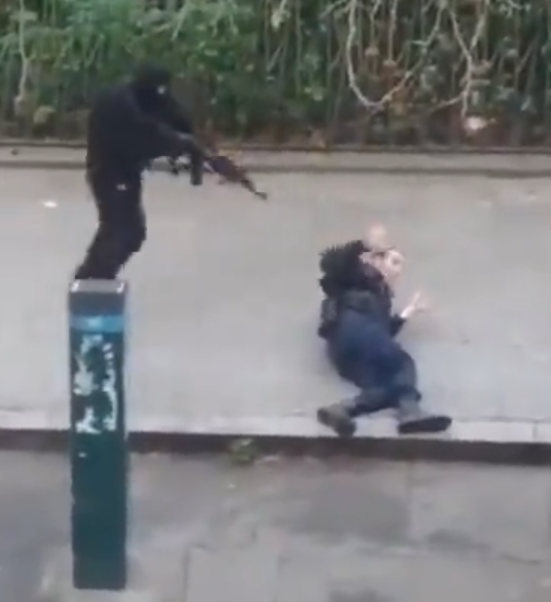 Before the shot is fired 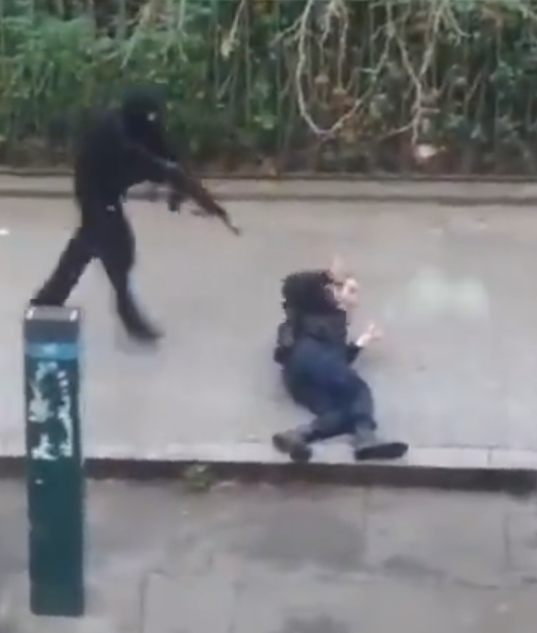 When the shot is fired 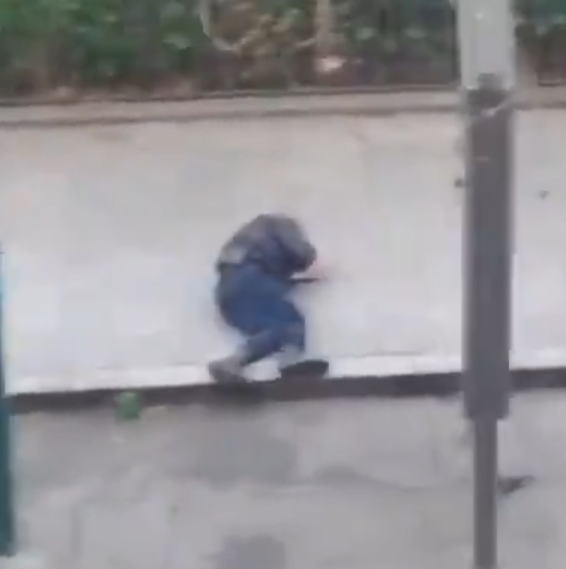 After the shot is fired

According to the media reports the headshot here killed the police officer instantly, but anyone with eyes can clearly see that the shot missed his head completely and hit the concrete infront of him - if he was shot at that close of a range with a 7.62x39mm his upper body would've shot forward in the video and gore would've shot across the sidewalk but it didn't. To add even more onto that if you watch the video very carefully you can easily see him already in the process of rolling over when the shot is being fired as he goes from looking at the shooter to quickly playing dead.

Furthermore there are a plethora of anomalies about the video itself, such as; why does the cameraman show little to no reaction to seeing a police officer be brutally murdered on the street? Why does he act so calm and collected through the shooting? Why is there minimal noise in the video outside of the gunfire and voices of the officer and shooters? Why do the shooters simply stop to kill this one police officer then speed away? Why does the video immediately end after they leave the scene? Why did one of the shooters leave his shoe on the ground when exiting the car?

For a comparison here's a video taken earlier and a further distance away by a civilian, panic can clearly be seen in the cameraman's movements and his voice - alongside those on the rooftop with him as they witness the events below unfold, it is consistent with the events unfolding in real time unlike the first video.

But what about the massacre itself? Well there are a few odd details that eyewitnesses inside of the Charlie Hebdo offices reported during the shooting itself, including testimony from a survivor named Sigolène Vinson who stated that one of the shooters said to her, and I quote:

"I'm not killing you because you are a woman and we don't kill women but you have to convert to Islam, read the Qu’ran and wear a veil."

This was right after they murdered a female worker there named Elsa Cayat, who her family claimed she was killed solely because she was Jewish, but there is little evidence to back up the claim, however her death proves that they do indeed kill women so why make such a statement at all to begin with? In the same questionable light eyewitnesses also reported that the shooters approached bystanders in the street before the shooting and claimed they belonged to Al-Qaeda in the Yemen and to tell the media that the shooting was the responsibility of Al-Qaeda.

After they finished their massacre in the Charlie Hebdo offices they fled in their getaway car before abandoning it, Saïd Kouachi supposedly left his ID card behind during the process, which begs a lot of questions which were never answered - the shooters were noted as being incredibly proficient and were most likely well trained military men that went to the lengths of covering their faces and fleeing the scene in a getaway car, indicating that they had intended to get away with the massacre but it was foiled, a better question is why Saïd would have even have it on him during the shooting to begin with. So it's obvious that this is a case of a planted ID card, a classic tactic to frame a suspect since the assassination of JFK. 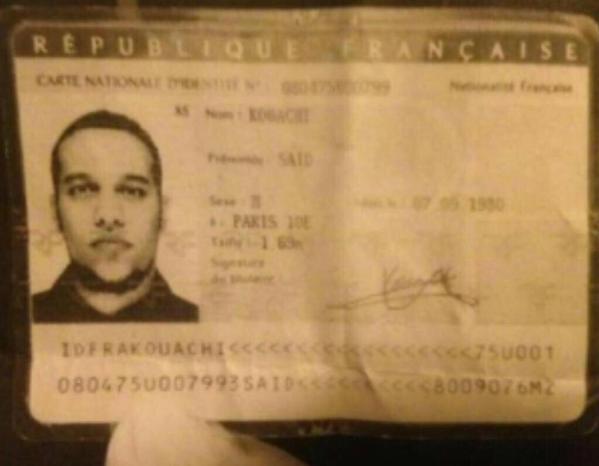 The ID which was 'left behind' by Saïd

What Videos Tell Us About Charlie Hebdo Paris Attack Gunmen

Note the shifting media narrative about the shooters; on one hand they want you to believe that they're highly trained killers with military experience, but on the other hand they also expect you to believe that they're sloppy enough to leave their IDs behind in the getaway car; they're painted as both highly trained and organized killers but also slow and dim-witted.

A few more things to note about the shooting is that both of the shooters were no strangers to the French government, infact both of them had been under the surveillance of French intelligence agencies since at least 2003 due to Cherif's connections with Al-Qaeda, he had even served an 18 month prison sentence over it and was on the US no-fly list. Both brothers were known to intelligence agencies as Al-Qaeda affiliates but they were unable to stop them before the Charlie Hebdo shooting occurred? How were they able to plan this whilst being in the radar? It doesn't make much sense.

Although perhaps one of the most telling details doesn't have to do with the shooters at all but instead the investigation itself, the lead police officer in charge of investigating the shooting was found dead of an apparent suicide after 'immense stress' - but the question remains did he actually kill himself or was he silenced after discovering something he shouldn't have?

The last bit of information I'll leave you with is the fact that some believed that the MOSSAD was behind the string of back-to-back Islamist attacks in France during the time period, including the Hypercacher market siege and the Bataclan massacre as a response to France wanting to recognize Palestine as an independent state, Israel was not happy about this at all and Benjamin Netanyahu even said the following regarding the plans:

"Do they have nothing better to do at a time of beheadings across the Middle East, including that of a French citizen? Recognition of a Palestinian state by France would be a grave mistake. The State of Israel is the homeland of the Jewish people, the only state that we have, and the Palestinians demanding a state do not want to recognise the right to have a state for the Jewish people."

The phrase 'Recognition of a Palestinian state by France would be a grave mistake' surely does sound like a thinly veiled threat, but is it proof of MOSSAD involvement in the attacks? Possibly, but whether it was the CIA, MOSSAD or even French intelligence it's clear that there's something very fishy about the massacre at the Charlie Hebdo offices.