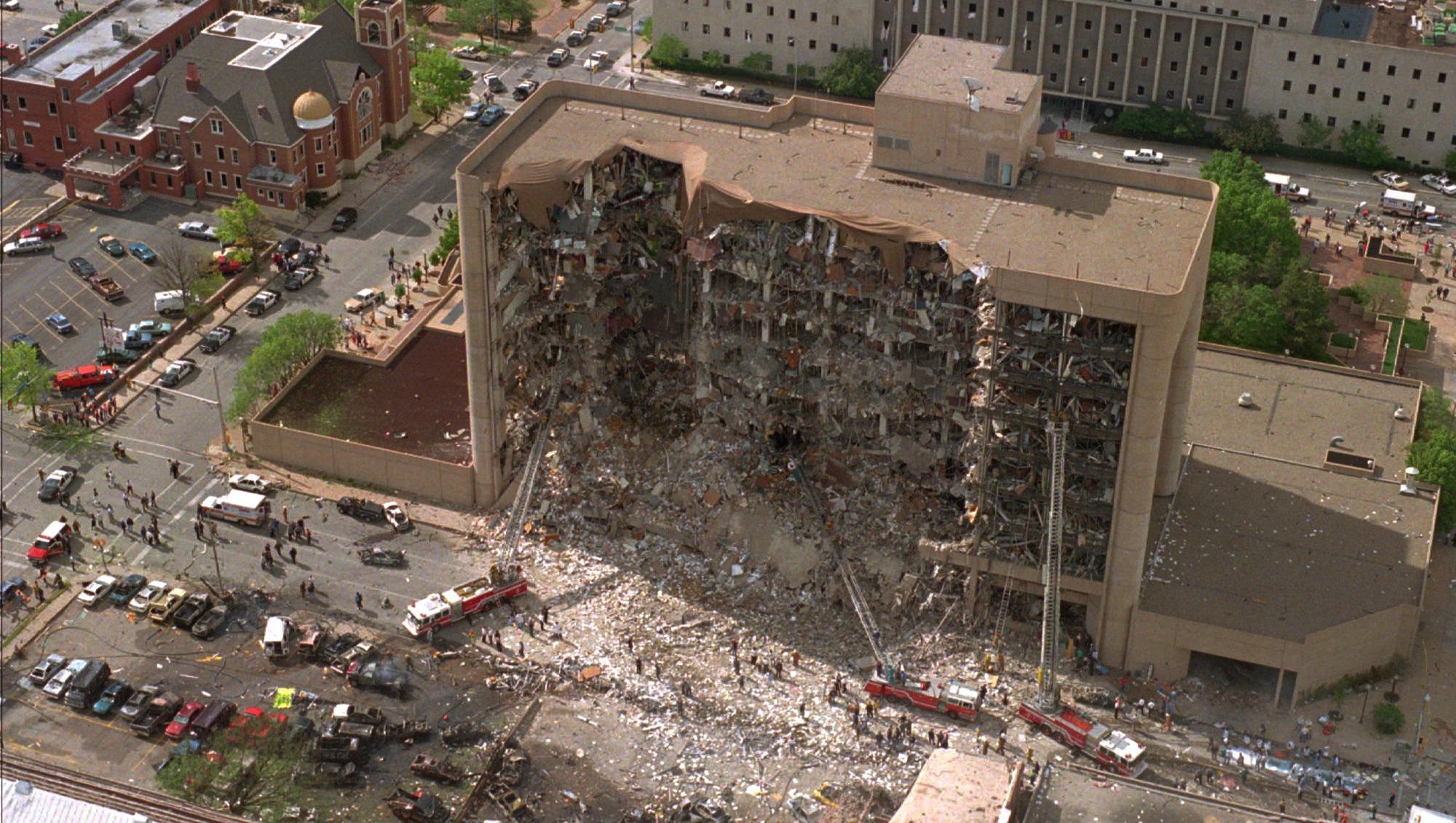 The remains of the Alfred P. Murrah federal building

On April 19th, 1995 an ANFO carbomb detonated outside of the Alfred P. Murrah federal building, killing 168 and wounding 759, the man blamed for the attack was Timothy McVeigh, a Gulf War veteran who was supposedly driven to carry out the attack after the FBI and ATF sieges at Ruby Ridge and Waco, serving as a form of payback against the government for what he perceived to be an act of treason against the American public.

But there is much more to this incident than meets the eye, so let's peel back the layers and take a deeper look, shall we?

More evidence of numerous bombs being used in the OKC Bombing are present, including statements from OKC Fire Marshal Dick Miller where he claimed that a second bomb had been found with a timer set to go off ten minutes after the first explosions. Highway patrol dispatch logs state second bomb was found, a nurse named Toni Garret stated that four rescue workers had told her that another bomb had been found set to explode ten minutes after the first bomb went off.

To add to the idea of numerous bombs in the building, the Oklahoma Geological Survey (OGS) recorded a seisomograph of the OKC bombing itself, picking up numerous different blasts on the day of the bombing - which would've been impossible for a single ANFO carbomb to do.

Seisomograph of the OKC Bombing

These anomalies around the OKC bombing did not go unnoticed as United States Airforce Brigadier General Ben Parton did an indepth report on the Oklahoma City Bombing which determined that the ANFO bomb described could have not done the damage it did to the Alfred P. Murrah federal building as the blast completely destroyed column B3, which was a steel-reinforced concrete pillar, column B3 was so far from the blast source that the truck bomb would only have subjected it to 27 pounds per square inch.

More doubt on the official statements regarding the bombing comes from a man named Samuel T. Cohen, a renown explosives expert credited with the creation of the neutron bomb, his words on the bombing are as follows:

"I believe that demolitions charges in the building were placed at certain key concrete columns did the primary damage to the Murrah Federal Building. It would have been absolutely impossible and against the laws of nature for a truck full of fertilizer and fuel oil, no matter how much was used, to bring the building down. I concur with the opinion that an investigation by the Oklahoma State Legislature is absolutely necessary to get at the truth of what actually caused the tradgedy in Oklahoma City."

Numerous survivors from the OKC Bombing vivdly recall the building trembling 'like an earthquake' before the explosion occurred, we'll start with the testimony of Jane Graham:

"Graham, an employee with the Housing and Urban Development (HUD), was in her office on the ninth floor of the Murrah Building. She felt an initial shock which she thought was an earthquake. Eight to ten seconds later she felt a force (much different from the first) come from the central east portion of the building, and then a massive explosion ripped the floors to the roof. The blast knocked her back toward the west and knocked her unconscious for a few moments. When she opened her eyes, there was heavy black smoke and the sky could be seen from the rupture."

The testimony of Jack Gobin:

"Gobin, an employee with the U.S. Department of Agriculture, was working at his desk in the Murrah Building the morning of the bombing. He told KFOR-TV in Oklahoma City that at first he thought it was an earthquake, but then the windows in his office blew in. He said he got under his desk and was not hurt."

The testimony of Virgil Steele:

"Steele was employed by Mid-Western Elevator Company which serviced the elevators in the federal complex. At the time of the bombing, he was northwest (about a mile north and about one half mile west) of the Murrah Building. He recalls hearing a loud rumble and, upon immediately exiting the building he was in, seeing 'two pillaring billows of smoke dust' and a 'streak of light.'"

Many more interesting pieces of testimony exist that beg to be answered, including statements that large amounts of cash, guns and explosive devices were being removed from the building in the aftermath of the bombing by ATF and FBI agents, that every single ATF agent was absent from the Alfred P. Murrah federal building on the day of the bombing, that the real bomber was killed in the blast - as evidenced by a third leg which wasn't able to be connected to any dead body or injured person in the bombing itself and whoever the leg belonged to remains unknown to this very day.

There were dozens of surveillance cameras that filmed the bombing itself and the carbomb pulling up to the building but none have been released to the public, and according to Jesse Trentadue, who was able to see the CCTV footage stated that the footage cuts off and doesn't show the carbomb pulling up to the building, only the aftermath of the explosion itself. Indicating that the video footage itself was tampered with. Ontop of this in 2012 the FBI said that they had lost the OKC bombing CCTV footage and that it was unlikely to ever be found again.

Another thing to note is the deaths of Kenneth Trentadue, a man who was tortured to death by the police in a case of mistaken identity and police Sergeant Terrance Yeakey who was the first officer on the scene of the OKC bombing, he openly expressed doubt at the official explanation of the OKC bombing and was later found dead with a slashed throat, wrists and a gunshot to the head which was ruled a suicide.

Requiem for the Suicided: Kenneth Trentadue

Requiem for the Suicided: Terrance Yeakey

The full 1998 interview with Terrance Yeakey's wife can be found here and will be linked before for ease of access, a shortened version was shown in the above video but the full audio is about an hour long and reveals how Terrance Yeakey knew something he shouldn't have and tried to tell his wife before he was murdered

I'll leave you with three more important pieces of information, the first being that a Ryder moving van was seen at the Camp Gruber-Braggs military base shortly before the OKC Bombing, the photos in question were taken in early April of 1995.

Another video by James Corbett detailing the secret aspects of Timothy McVeigh's life which are left out of the official narrative about the OKC bombing.

The Secret Life of Timothy McVeigh

And a 2011 documentary by James Lane which speaks extensively on the shady dealings around the OKC bombing at great length, if there's any video to watch about the OKC bombing it's this one simply due to how much it covers in it's runtime.