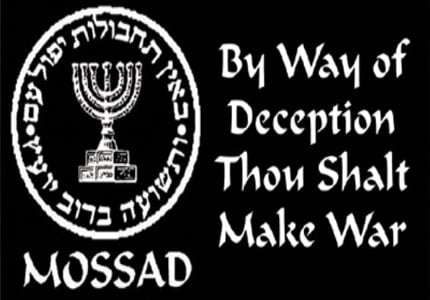 The unofficial motto of the MOSSAD, as coined by numerous former MOSSAD agents

The MOSSAD is the secret intelligence agency of Israel, a rather infamous intelligence agency that has been caught with it's hand in the cookie jar far more than once and it's untrustworthiness is akin to that of the FSB or the CIA itself due to how often they've engaged in false flag tactics, espionage against their allies or spying on civilian populations - let's take a peak into the history of the MOSSAD and their less than spotless history.

Agents of the MOSSAD have been caught numerous times using forged passports in order to carry out covert operations, assassinations and the sort and it has caused a rather expected negative reaction from governments around the world as the way they were used typically put the lives of average citizens travelling abroad at risk. Some of these incidents include:


But that's just the tip of the iceberg and we have much, much more to pick apart here so let's move onto the next topic, there's a lot more to cover there so get ready.

The MOSSAD have been responsible for a fair amount of false flag attacks, and have been accused of carrying out hundreds more false flag operations by governmental officials and the average citizen for their political benefit - perhaps the most infamous case of these being the Lavon Affair, in which the MOSSAD hired Egyptian Jews to plant bombs inside of American and British buildings and leave evidence behind indicating the Muslim Brotherhood as being responsible for the act of terrorism, a brief description of the failed operation reads as follows:

"In 1954, Israeli Military Intelligence (often known by its Hebrew abbreviation AMAN) activated a sleeper cell that had been tasked with setting off a series of bombs in Egypt. In this risky operation, a small number of Egyptian Jews were to bomb Western and Egyptian institutions in Egypt, hoping the attacks could be blamed on Egyptian opponents of the country’s leader, Gamal Abdel Nasser, including members of the Muslim Brotherhood or the Communist Party. The ensuing chaos, it apparently was hoped, would persuade Western governments that Nasser’s regime was unstable and, therefore, unworthy of financial and other support."


The ability for the MOSSAD to carry out acts of terrorism and pass them off as being the actions of Arabs or Islamic terrorists was also noted in detail by officers from the School for Advanced Military Studies, saying that the ability to do so was their "wildcard" of sorts. A section from the linked article reads as follows:

"Of the Mossad, the Israeli intelligence service, the SAMS officers say: Wildcard. Ruthless and cunning. Has capability to target U.S. forces and make it look like a Palestinian/Arab act."

The article was later scrubbed from the archives of the Washington Times but thanks to the waybackmachine and archive.is we still can read the entire article today.

Now for what might be the most explosive section in this entire report, spying, the MOSSAD has been caught spying in countries dozens upon dozens of times from their inception to the current day and age with little to no explanation ever given to the public as to why they did so, we got a lot to crack open so let's get started as we have a LOT of ground to cover here:

Speaking on Israeli spying and in particular the Israeli art student scandal, I highly recommend watching this four part special on the spying operation that was forced to be pulled off of the air, take a look it's really interesting.

The last thing here I'll mention are the MOSSAD ties that both Ghislaine Maxwell and Jeffrey Epstein had, who were both running a massive sex trafficking operation which provided underage children to the world's elites - the most widely known testimony comes from a book titled 'Epstein: Dead Men Tell No Tales', an article describing the book will be copied below, with all of the original images intact.

GHISLAINE Maxwell and her paedophile lover Jeffrey Epstein were both Israeli spies who took pictures of powerful men having sex with underage girls to blackmail them, their alleged Mossad handler has sensationally claimed.

The pair allegedly ran a "honey-trap" operation where they would provide young girls to politicians in order to squeeze them for information for the Israelis. The unsubstantiated claims have been made by Ari Ben-Menashe who claims he is a former Israeli spy.

Ben-Menashe claims that he was the “handler” of Ghislaine's dad Robert Maxwell, who was also a spy, and that it was the former newspaper baron who introduced Epstein and his daughter to the Israeli intelligence agency.

He makes the unverified claims in a new book called "Epstein: Dead Men Tell No Tales".

In a preview of the book, shared with Sun Online, Ben-Menashe says: “Mr Epstein was the simple idiot who was going around providing girls to all kinds of politicians in the United States. Ari Ben-Menashe claims he is a former spy handler

Ben-Menashe is a mysterious Iranian-born Israeli businessman who claims to have worked for Mossad from 1977 to 1987.

He was arrested in 1989 in the US on arms dealing charges but was acquitted in 1990 after a jury accepted he was acting on behalf of Israel.

Israel tried to distance themselves from him, with government sources saying he never had anything to do with intelligence services, although other news reports - in both the US and Israel - confirmed he did.

He later wrote a book called Profits of War: Inside the US-Israeli Arms Network and in the early 1990s claimed that Robert Maxwell, Ghislaine's dad, worked for Mossad. Epstein and Maxwell would photograph politicians having sex and then blackmail them, according to Ben-Menashe Ghislaine is accused of procuring young girls for Epstein

The new book takes this further and claims Maxwell may have worked for other governments too as as a double or triple agent.

Ben-Menashe claims that despite reports Epstein and Ghislaine Maxwell met in the early 90s in New York, they actually met much earlier - through the socialite's father.

He claims that Robert Maxwell introduced Epstein to Mossad and then Ghislaine got involved later.

Files from the British Foreign Office, released in 2003 appear to back the claims Robert Maxwell may have been a spy, with one report describing him as a “thoroughly bad character” who was being “financed by Russia” and another saying his “questionable activities” had been brought to the attention of the Foreign Officer “on several occasions”.

While the Maxwell family have always denied such reports, family friend Laura Goldman says in the book: “My feeling is that he probably was an agent to the Russians, the Israelis, and the British. I believe that Ghislaine continued his work.”

It is not known whether Maxwell and Epstein gathered any intelligence about pal Prince Andrew in their alleged espionage work - although the book suggests the Royal was a target. Prince Andrew and his accuser Virginia Roberts with Ghislaine Maxwell

John Dougan, who served as Deputy Sheriff in Palm Beach, Florida at the time Epstein was in prison for his first slew of child sex offenses, says he was given access to Epstein's case file - including video tapes - in its entirety by Palm Beach Police Detective Joseph Recarey, who later died unexpectedly aged 50.

Dougan managed to copy the tapes, encrypt them and flee to Russia, where he now lives.

Although he has not watched the encrypted files he tells Epstein: Dead Men Tell No Tales that he is certain they contain blackmail material involving wealthy people - and that Prince Andrew was a target.

“Do I think that Epstein was probably put up to getting some wealthy people to sleep with some underage women so those people could be black- mailed by Western intelligence agencies? Absolutely I do,” he said.

MI6 were “concerned that Russia may have obtained kompromat, compromising material, on Prince Andrew,” according to a Times report - although Dougan claims he has given no information to the Russians.

Epstein was found dead in his New York prison cell on August 10 after allegedly committing suicide, while he faced charges for sex trafficking minors. The cover of 'Epstein: Dead Men Tell No Tales'

Melissa Cronin, the book's author, believes that Epstein's alleged intelligence links add weight to the theory that he did not kill himself but was murdered.

She also points to Epstein's and Maxwell's links with prominent people from the science and technology industries - and believes the pair not only ran a honeypot operation but also an information-gathering operation.

"Before I started with the book, I was extremely skeptical of the murder theory.," she told Sun Online.

"I'm definitely not a conspiracy theorist by nature at all, but the more that we dug into this, there's just so much incontrovertible evidence about his work in the world of espionage, his work with Mossad and it all comes together to make a really compelling argument for the fact that he was murdered.

"I think one thing that is interesting and important to say is that Epstein wasn't necessarily a spy in the traditional sense, he wasn't particularly loyal to Israel per se, he was a collector of information.

"So of course there was the blackmail aspect of what he was doing in terms of the honey trap and getting this footage of people that he could use as leverage.

"At the same time, something that a lot of people haven't really explored is how he cultivated these relationships within science and technology.

"We get really deep into that in the book and to how he was meeting with and extracting really sensitive information from scientists and eminent theorists and things like that.

"That material - probably even more so than the blackmail material - is what really would be of interest to a foreign power such as Israel."

Now that we're near the end of my report on the MOSSAD, I'll leave you with a few articles about the Epstein-MOSSAD connection and a few videos detailing it, just for resource purposes.

From “Spook Air” to the “Lolita Express”: The Genesis and Evolution of the Jeffrey Epstein-Bill Clinton Relationship

Mega Group, Maxwells and Mossad: The Spy Story at the Heart of the Jeffrey Epstein Scandal